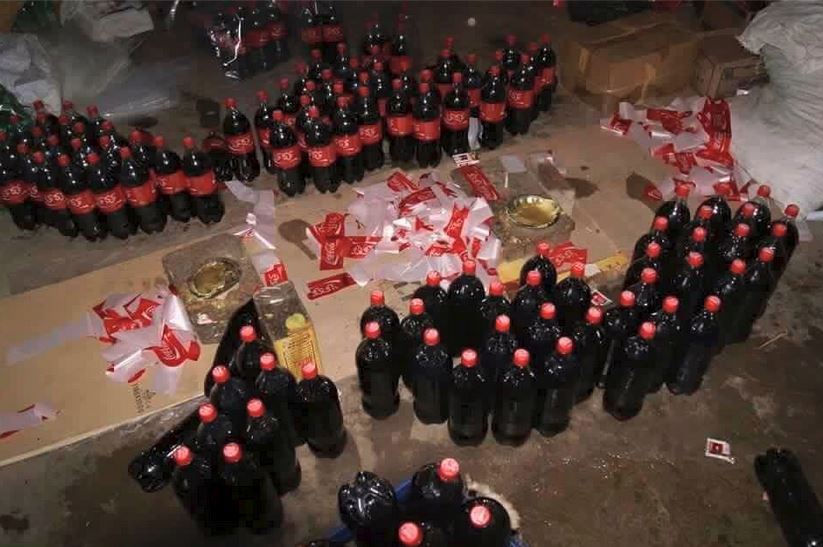 We affirm.I.Petrosian and two associates purchased genuine Coca-Cola bottles, filled them with a cola-like carbonated beverage that was not Coca-Cola, and told purchasers the beverage was Coca-Cola.

Petrosian was charged with violating 18 U.S.C.S 2320(a), which provides: “Whoever intentionally traffics orattempts to traffic in goods or services and knowingly uses acounterfeit mark on or in connection with such goods or ser-vices shall” be criminally liable.

Petrosian asserts that the dis-trict court erred in instructing the jury that “the term`counterfeit mark' includes genuine trademarks, affixed to packaging containing products not made by, but sold as products of the owner of the registered trademark.”

(i) that is used in connection with trafficking in goods or services;

(ii) that is identical with, or substantially indistinguishable from, a mark registered for those goods or services on the principal register in the United States Patent and Trademark Office and in use, whether or not the defendant knew such mark was so registered; and

The district court's jury instruction was consistent with section 2320.

When a genuine trademark is affixed to a counterfeit product, it becomes a spurious mark.

A “spurious”mark is one that is false or inauthentic.

A trademark is “any word, name, symbol, or device, or any combination thereof[ ] used by a person … to identify and distinguish his or her goods, including a unique product, from those manufactured or sold by others and to indicate the source of the goods . . . .” 15 U.S.C. S 1127.

Obviously, this spurious Coca-Cola mark was “identical with or substantially indistinguishable from” the registered Coca-Cola mark, as section 2320 requires.

The spurious mark was also likely to cause confusion because consumers were likely to assume the mark indicated Coca-Cola was the source of the beverage inside the bottle.[3]

This reading of section 2320 comports with the legislative history. Congress clearly intended to curb the trafficking of counterfeit goods and indicated no intention to exempt defendants who trafficked counterfeit goods under a genuine trademark. See S. Rep. No. 98-526, at 5 (1984), reprinted in1984 U.S.C.C.A.N. 3627, 3631 (“To help stem . . . an `epidemic' of commercial counterfeiting . . . ,

S. 875 provides forstiff criminal penalties for those who intentionally traffic ingoods or services knowing them to be counterfeit.”); Joint Statement on Trademark Counterfeiting Legislation, 130 Cong. Rec. at 31673 (“The Senate and House bills both aimed at accomplishing three primary changes in the law:[including] creation of criminal penalties for intentionally dealing in materials that one knows to be counterfeit . . . .”).[4]

Further support for this reading is found in opinions holding defendants civilly liable under the Lanham Act for affixing genuine marks to counterfeit products.

Petrosian asserts the district court abused its discretion by denying his requests to testify without an interpreter.3 After observing Petrosian's attempts to testify in English and hearing him admit he “probably [could] not” testify in English and might not understand questions posed in English, the district court determined that Petrosian's English testimony would not be reliable. A district court has a legitimate interest in there was “no difference, so far as the objectives of [the Lanham Act] are concerned, between doing this and making a reproduction of a [genuine] trademark.” General Elec. Co., 877 F.2d at 534.

Petrosian was not deprived of his right to take the standand testify on his own behalf. He told his own story. The interpreter was not a witness who testified about his independent recollection of the events at issue; he simply related Petrosian's testimony verbatim. Petrosian was afforded the opportunity to convey his sincerity to the jury by his physical reaction as the interpreter repeated questions and by the tone of his voice and his facial expression as he responded. AFFIRMED.

FindLaw The Right of Publicity A separate issue f[...]
Back to top