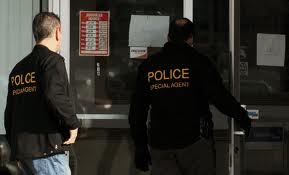 Under revised Federal statutes, martial art instructors and/or martial art school owners may be found guilty of trademark counterfeiting conspiracy merely by participating in the illegal act such as receiving, distributing, selling, etc. any item bearing federally registered trademarks without a license from the trademark owner.

Those familiar with federal criminal law might point out that there has long been a general conspiracy statute, 18 U.S.C § 371, which makes it a crime to conspire to commit “any offense against the United States.”[11] This language appears to make a federal crime out of a conspiracy to violate any federal law including all federal trademark laws.

Indeed, the United States Attorneys’ Manual helpfully points out that conspiracies in violation to traffic in counterfeit goods  may be prosecuted under 18 U.S.C § 371.[12]

While conspiracy to commit trademark counterfeiting was already a chargeable offense, the new statute eliminates the requirement for an overt act in furtherance of the conspiracy.

Under the general provisions of 18 U.S.C § 371, criminal culpability requires that “one or more of such persons do any act to effect the object of the conspiracy.”[13]

Without an overt act requirement, a person can be found guilty of counterfeiting conspiracy merely by agreeing to violate the act, without any actions in furtherance of the conspiracy.

As a result, U.S. Attorneys will find it significantly easier to charge and prosecute trademark counterfeiting defendants…

In addition to removing the overt act requirement, the changes to 18 U.S.C § 2320 include increased penalties for trademark counterfeiting conspiracy.

Under 18 U.S.C § 371, conspiracy is punishable by up to five years imprisonment.[18] The changes to 18 U.S.C § 2320 make conspiracy punishable to the same degree as intentionally or attempting to commit the offense. [19]  These punishments range up to $15 million and even life imprisonment for offenses that cause death.[20]

The opinions expressed are those of the authors and do not necessarily reflect the views of the firm, its clients, or Portfolio Media, publisher of Law360. This article is for general information purposes and is not intended to be and should not be taken as legal advice.

We use cookies to ensure that we give you the best experience on our website. If you continue to use this site we will assume that you are happy with it.AcceptPrivacy Policy